Before launching into the real purpose of this post, I must make one comment: supporting a West Coast baseball team while living on the East Coast is awesome. It’s almost 11 p.m. and the Mariners and Marlins are only in the third inning. I’ll be in bed before it’s over, but in Oregon, you don’t get to fall asleep listening to the M’s. (Of course, I understand that this is a double-edged sword, because it’s this same phenomenon that helps perpetuate the “East Coast bias” in sports – East Coasters don’t give West Coast teams [see, “2010 Oregon Ducks”] the credit they deserve because they’re rarely awake late enough to watch them play. But that’s for another post.)

One of my favorite pictures of Hope and me - at the 2010 Civil War football game.

It was a big weekend for the Landsem family, as my sister Hope and my parents traveled to New York to drop Hope off at the United States Military Academy at West Point, where she’ll soon begin her first year. Tomorrow is known as “R-Day” in West Point-speak. It stands for “Reception Day,” and it basically means Hope’s first day as a West Point cadet. (I’m probably messing up some of the terminology, because I don’t think she’s officially a “cadet” until she finishes basic training, but you get the idea.)

Anyway, it’s a huge step. Most of my sister’s friends are still basking in the glory of summer vacation, but for the next several weeks, she’ll be acclimating herself to West Point life during BEAST – that’s an acronym for something I can’t fully remember, but it’s cadet basic training. On “A-Day,” or “Acceptance Day” in the middle of August, she’ll become a full-fledged cadet and begin her academic endeavors at West Point.

Hope is fully prepared for this: she was Student Body President this past year at her high school, was a Valedictorian, wants to be a chemical engineer, went to a Summer Leadership Seminar at West Point last summer…she was even a contestant on the kids’ edition of “Jeopardy!” in 2005. (No joke. She even has an IMDB profile because of it.)

I feel very lucky to have had some one-on-one time with my sister this weekend. She arrived in New York on Friday night (our parents didn’t come until Saturday) so we spent Saturday in the city.

A view of Manhattan from the Roosevelt Island Tram

We took the Roosevelt Island tram to um, well, Roosevelt Island. I don’t know how many people generally ride the tram, but it seems to be a hidden gem of New York City tourism. Tram fare is no different than a regular MTA MetroCard fare, and you get a pretty solid view of Manhattan. It’s not as impressive as an observation deck like Top of the Rock, but for a few bucks, it can’t be beat. The island itself also has nice walkways along the East River.

After meeting our parents last night, we drove to Newburgh, New York – a town near West Point. Escaping the city for the first time since I arrived was relaxing, but strange. We were only 50 or 60 miles outside NYC, but it felt like lightyears. Where were the skyscrapers? The smells? The subway stations? Here, people drove their own cars and lived among rolling hills and the Hudson River. I’m making it sound more idyllic than it really was, but the contrast between West Point and the city was astounding. My New York bubble had been popped.

We made a quick tour through the West Point campus (just in the car) but the place is stunning. You can just feel the history. I’m so proud of my sister for earning admission to the academy and for securing her place at an institution that’s taught some of our nation’s most important leaders. I mean, just read this sentence from West Point’s website:

From the day of its founding on March 16, 1802, a favorite expression at West Point is that “much of the history we teach was made by people we taught.” Great leaders such as Grant and Lee, Pershing and MacArthur, Eisenhower and Patton, Schwarzkopf and Petraeus are among the more than 50,000 graduates. Countless others, following military service, have had distinguished careers in business, medicine, law, sports, politics, and science.

Words fail me. How can you not be impressed? 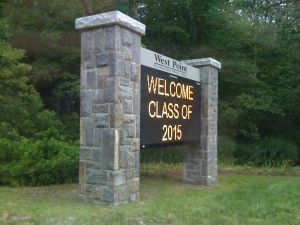 anniversary of “the class the stars fell on,” West Point’s class of 1915. That class included many of the most important leaders of World War II, like Omar Bradley and Dwight D. Eisenhower. This is cool for obvious reasons (“Oh, yeah, my fellow West Point alumnus, Dwight Eisenhower…”) but also because I’d assume there’d be a high likelihood of someone super important speaking at graduation (which I plan to attend).

While the weekend was bittersweet – I won’t see Hope until mid-August, and can only communicate via written letters until then – I am grateful for the time we had this weekend. The transition to military life likely won’t be easy, but I know she’ll do great. And in a few years, she’ll probably run for president.

Okay, that was lame, but it fit so perfectly. It has hit me that my time in New York is halfway over.

Time flies when you’re in the big city, so without being too sappy or cynical, here are the five main lessons I’ve learned, about the city, the public relations industry, and myself since I’ve been in New York:

Even though the last lesson was a little sappy, it’s still true. I think I’ve learned more about myself in the last month than I did in the previous nineteen years (more or less).

Thanks for reading over these past few weeks – feel free to drop a comment and say “hi!” Here’s to the next five weeks!