Ahhhh, here we are again. Another Sunday night, another blog post. I’d like to blog more consistently, so I feel a twinge of guilt every Sunday night when I realize that I haven’t posted in a week, but I remind myself that my time spent not blogging was spent working and exploring NYC. Both good things, I would like to believe.

I will make a concerted effort to post more this week, but for now, you’ll have to live with this random post detailing three great things about this past weekend and the week ahead:

While my walk home from work on Friday was dry, the skies opened up later in the evening and the idea of going out wasn’t very appealing. So, we settled for a trip to Pinkberry and headed back to our building to watch the greatest romantic comedy of all time, “When Harry Met Sally…”. It’s definitely one of my top 5 favorite movies (trust me, I’ve ranked them). I LOVE it. Everyone was  impressed with my ability to recite whole scenes from memory. 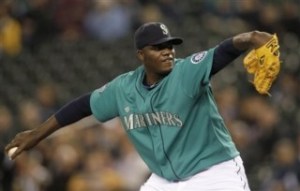 2) Michael Pineda as an All-Star

My new favorite Seattle Mariner, rookie phenom pitcher Michael Pineda, was named to the American League All-Star team today as a replacement for Justin Verlander. The guy is a freakin’ stud, outpacing King Felix as the team’s ace. I doubt he’ll get much playing time in the All-Star game (who does?) but it’s cool to see him named to the team so early in his career.

The All-Star game will be on FOX at 8 p.m. EST on Thursday. This year it’s being played at Chase Field in Phoenix, home of the Arizona Diamondbacks, and I think we can all agree it’s a real shame that the park can no longer be called the BOB (a nickname the park enjoyed during its years as “Bank One Ballpark”).

I hate bananas. I haven’t eaten once since maybe age four (and even then, I probably just ate the chocolate off of a chocolate-covered banana). But, my dad sent me this interesting Wall Street Journal article on banana consumption in New York City, and it’s worth a read if you’re interested in bananas and/or the economy and/or New York. Apparently, New Yorkers are banana-crazed. This article takes a look at how the NYC banana business runs, how much they cost at different locations and what types of bananas people want to buy.

Well, I hope you enjoyed three bullet points about three completely unrelated topics. If you have three (or one or two) funny comments, links or thoughts to share about your weekend, please share; I’d love to read them!